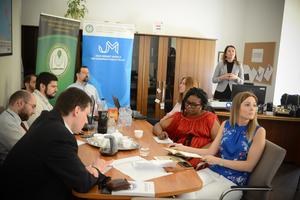 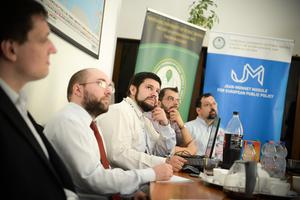 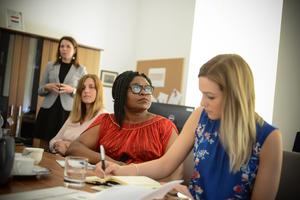 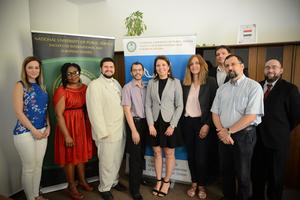 On 20 June 2018, the Faculty of International and European Studies at the National University of Public Service organised the closing workshop of the three years long (2015-2018) Modul for European Public Policy project.

“Within the framework of the project and by the support of the European Union, we have organised several international conferences, developped and launched two English master degree courses and published numerous studies related to this matter” - described Dr. habil. Boglárka Koller the accomplishments of the Faculty during the project. The Dean of the Faculty of International and European Studies accentuated that this modul was the first step towards the establishment of a Jean Monnet Centre of Excellence at the university.

After her welcome speech Boglárka Koller talked about the challenges that the European Union had to face in the past decade. First, she mentionned the multi-layer crisis of the EU following the Ratification of the Treaty of Lisbon.  The global economic crisis of 2008 affected Europe as well which has significantly increased the turning away from the EU in other countries. It could be clearly identified that the difficulties of the economic and social models were part of the crisis. The EU’s Peace and Security Narrative was also interpreted in a different framework due to the situation in Ukraine. “Since its formation, one of the main objectives of the European Union was to maintain peace and avoid war” - emphasized the Dean.  She added that “the unresolved refugee crisis and the terrorist acts throughout European big cities have a negative impact on the identity of European communities”. As she said, the member states are divided regarding the way to manage the crisis, nevertheless in the new millenium Europe had to face the challenges of euroscepticism and populism and in the past years significant changes has taken place in the EU’s external relations. These changes have had an effect on the European identity among EU citizens. According to Boglárka Koller the main task of the EU now is to solve this identity crisis and to strenghten the common European identity of EU citizens.

After the presentation of the Dean, Pol. Major Dr. Zoltán Székely described the details of the three years long Jean Monnet project and the characteristics of the European R+D programmes as well as their logic. He highlighted that from a strategic perspective the researches have followed the 1+2 approach, i.e. the European Union generally provides one third of the support while the remaining part is supported from other ressources by the applicant. Alongside the Jean Monnet Modul, the researchers of the university were also working in several European public administration studies, for instance the iBorderCtrl, which is an innovative project that aims to enable faster and thorough border control and involves 9 countries and 13 other partners.

As part of the programme, Dr. habil. Anna Molnár presented the European Union’s foreign policy. The associate professor and head of department of the Faculty of International and European Studies quoted the former President of the European Commission, Jose Manuel Barroso while describing this very complex matter. “In the European Union's foreign policy, the member states do not lose their independence but they rather share it.”  As said, the European Union, in a classical sense, cannot be considered as a great power and this can be seen in its foregin policy.

Anna Molnár emphasized that from a foreign policy aspect, maintaining peace was one of the key objectives of the member states. Because of its importance, a European Defence Fund was established in 2017 in accordance with the Treaty of Maastricht ratified in 1993. Instead of defining the EU as great power, the experts, based on the Union’s international relations, rather consider it as a civil, soft, normative or ethical power. The EU contributes to peace maintenance, it is a responsible organisation and partner in development. At the same time, the EU defends human rights, provides humanitarian aid in a crisis and in cooperation with the UN, it strives for global security and defence. The European Union’s diplomacy represents the European values. Romano Prodi, former President of the European Commission defined the EU in 2010 as “a global civil power that works for sustainable development”.

The so-called soft power of the EU’s foreign policy is visible in its enlargement plans as today it is a very attractive organisation where more countries would like to join to.

One of the most important elements of European Union’s foreign and security policy is the Neighbourhood Policy, to both east an south, however it also needs to face many foreign and security policy challenges such as the euroscepticism, war situation and fragile states, international terrorism, organised crime and the lack of common migration policy. The EU has to cooperate very closely with NATO in order to find solution to these issues. The European Union has implemented in 2016 a new Global Strategy to enhance the cooperation.

In the next part of the workshop, Dr. Tibor Ördögh talked abot the EU’s enlargement policy, with special attention to the Western Balkans enlargements. The senior lecturer of the Department of European Studies, Faculty of International and European Studies, higlighted that accession of the Balkan states to the EU raised further complexe questions. He explained that Turkey has applied for membership in 1964, Montenegro in 2008, Serbia in 2009, the former Yugoslav Republic of Macedonia in 2004, Albania in 2009 and Bosnia and Herzegovina in 2016. Regarding the open negotiations on “chapters”, Turkey has only closed 1 chapter out of 16, Montenegro closed 3 out of 30 and Serbia closed 2 out of 12. Currently there is no open chapters regarding the negotiations with Macedonia and Albania; Kosovo is a potential candidate however it has not officially applied for membership yet.

In the next session, Márton Kaszap talked about Brexit, one of the most actual topics within the EU. The assistant lecturer of the Department of European Studies stressed that the main European decision making mehanisms are based on consensus and thus it is a slower process than on nation-state level. “In case of Brexit, the experts have predicted the opposite to happen” - added the assistant lecturer. Due to the fact the Great Britain’s position is divided, its domestic policy does not allow to take the necessary steps. On the other hand, the European Union - especially Michel Barnier, European Chief Negotiator for the United Kingdom Exiting the European Union - is firmly representing the European values, position with special focus on single market. The Brexit negotiations are still ongoing, hence the outcome of the relationship between the United Kingdom and the European Union are yet to be determined.

The last presenter of the workshop was Catherine Enoredia Odorige, PhD student at NUPS who showcased the subject of her doctoral thesis. In her research, she focused on German and Hungarian NGOs that are helping refugees. She worked with NGOs from Munich and Budapest and analysed their activities through different case studies.


Tags: NUPS conference international 2018 Jean Monet EU
We use cookies providing the best user experience along with secure browsing to our visitors. You can change your cookie settings in your browser. More information